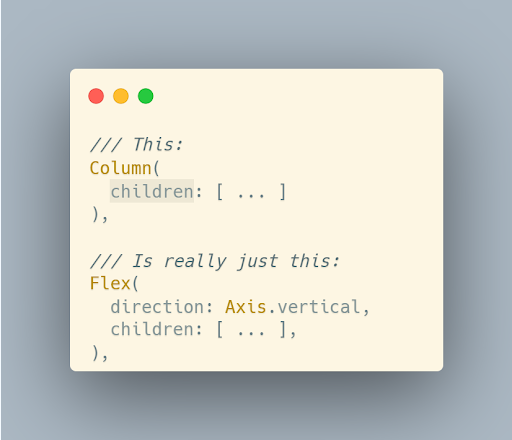 Written by Scott Stoll on behalf of DevAngels Limited

As they stand currently, the docs explaining how a Row or Column are laid out are pretty confusing for beginners, but we’re hoping that will change soon. Regardless, we feel it’s important that the process be explained in detail, and in terms that are easy to understand even for those who have never used Flutter before. So, go refill your coffee barrel (you still drink from a cup?) and let’s dive right in!

Flutter’s multi-child layout algorithm is used when the constructor of a Flex is called, and the Flex is what we use as a basis for Rows and Columns. One of the things you have to pass into a Flex is the direction parameter, which takes an enum called Axis, and Axis can be vertical or horizontal.

If you use a Column, the constructor for the Column is going to take all of the parameters you gave it and then call the constructor of a Flex, after adding the direction parameter,axis.vertical”.

Does Flex’s superclass use the algorithm?

Do I have to know this in order to be a Flutter Developer?

If a Flex isn’t a flex but the Flex can flex, does that make it a Flexible?

That should take care of that. So, without further ado, “let’s crack on”…

Since the description in the docs is subject to change, we won’t show them here. Instead, we’ll go over what each step is actually doing.

Step 1) Layout things that don’t have any flex.

At this point, we’re not going to set any sizes in the main axis. In fact, the docs expressly state: “Layout each child a null or zero flex factor (e.g., those that are not Expanded) with unbounded main axis constraints and the incoming cross axis constraints”. This means each child will be laid out without any minimum or maximum sizes being specified, yet. So, at the moment, we’re basically laying them out in the order they’ll appear, without specifying their main axis size.

In the cross axis, we let the children be whatever size they want to be unless the CrossAxisAlignment is set to stretch. If it is, then force each child to be as large as the Flex’s parent will allow it to be in the cross axis.

Now we will take a look at how much leftover space there is and start reserving chunks of it for the Flexibles. The docs actually say the space will be divided, “among the children with non-zero flex factors”. However, the only widgets in Flutter that can have a non-zero flex factor are the Flexible and the Expanded, which is just a specific kind of Flexible.

Also, there is no reason for a Flexible to have a flex factor of 0, they even default to 1. So, it’s pretty safe to just say we’re going to be reserving chunks of the leftover space for all of the children that are Flexibles. After all, if they had a zero flex factor then they’d have been laid out already in Step 1.

So, if there is 100 dp of space that is still available after laying out the children that have set sizes, our four Flexibles will get 25, 25, and 50 dp reserved for them, respectively.

Step 3) Lay out the Flexibles.

There are a few steps involved in this… step.

But wait… What if a Flexible doesn’t use all of the space that was reserved for it? Is the unused space given to an Expanded, or some other widget?

Well then, if all of the children are not using all of the space, won’t that make the Flex (the Row or Column) shorter than the size its parent told it to be?

If the children aren’t using all the space, and the Row or Column is, then there is only one other possibility. The Row or Column has unused space inside of it. And this, dear coffee guzzler, is the correct answer.

What makes this especially tricky is the fact that a Flexible doesn’t have a background color, it’s transparent. This makes it look like the Row or Column is shorter than it should be, but what’s really happening is that you’re able to see through the empty space that’s not being used. This creates the illusion the Flex is shorter than it really is, since it doesn’t have a border to show you its boundaries.

Step 4) Determine the cross axis size of the Flex.

Step 5) Determine the main axis size of the Flex.

It can’t. This is when you get a RenderFlex error, and what we affectionately call, “The Red Screen of Death”.

There are a number of alignment options, and this is when the one you chose, then the defaults, are applied.

In the Main Axis:

In the Cross Axis:

Summing Up: A test of your mastery.

If any of this is unclear to you, then read the article again. You will know you have achieved mastery of this algorithm when the following actually makes sense to you:

Come back next time for an overview of Theme Extensions. Until then, happy Fluttering

Get in touch today.